Come be part of it!

I am an IRONMAN Certified Triathlon Coach, with a Certificate of Completion Course with Training Peaks University, with many years of experience in Triathlon and Multisport. Based in Cape Town, Blouberg.

As much as I enjoy taking part in Triathlons and Multi-sporting events myself, I find greater pleasure in helping people get involved in this fantastic sport. Which leads to great experiences and incredible memories, which is why I started KIKstart Triathlon Training in August 2015.

My vision is not only to coach and train people to achieve their sporting goals, but also develop a group or team where everyone plays an important part and all have a sense of belonging. A feeling of being surrounded by good people with similar interests and goals, who inspire and motivate each other – where we all help and look out for one another – and I truly believe we have accomplished this.

I am keen to share my knowledge, with both beginner and experienced athletes. It is my way of giving back, to help people get involved in this fantastic sport, to achieve their goals and realize that anything is possible, if you put your mind and body to it. And along the way, through the journey, to SMILE and have as much FUN as possible! 🙂

I started Triathlons in 2009, with a junior provincial level Swimming and Tournament Water-skiing background. I have since competed in numerous sprint and Olympic distance Triathlons. Twice representing Western Province for the Olympic distance at the South African Championships in 2012 and 2013, and twice achieving Triathlon South Africa colours in the same years. I travelled and participated in the ITU World Championships in New Zealand representing Triathlon South Africa. After which I tried my first Ironman 70.3, which followed onto Ironman Africa Champs, which I have taken part in a few times. I have swum from Robben Island to Big Bay Blouberg 7.8km. Most recently I competed and completed in Norseman Xtreme Triathlon August 2017 one of the most extreme Iron distance triathlons in the world. I also took part in Celtman Extreme 2016 (Scotland) and Swissman Xtreme Triathlon 2015 (Switzerland), I have also taken part in many half marathons, full marathons, trail running and cycling events over the years. My future goals include continuing to tackle the remaining Xtri events (or Xtri World Tour) the most extreme triathlons all over the world. Whilst continuing to put coaching and KIKstart Triathlon first and foremost. 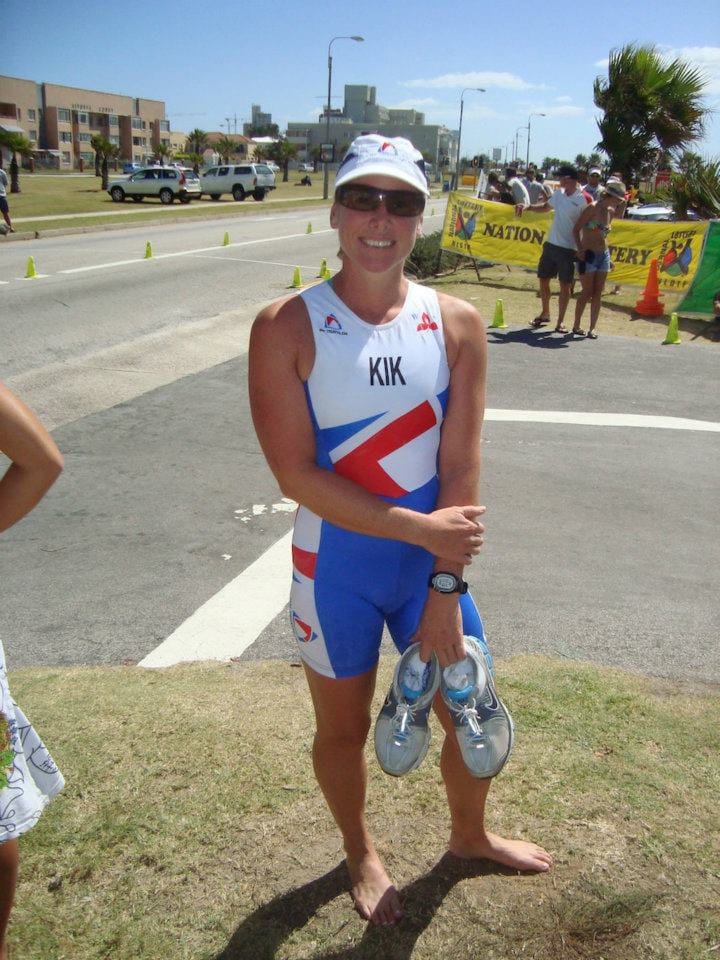 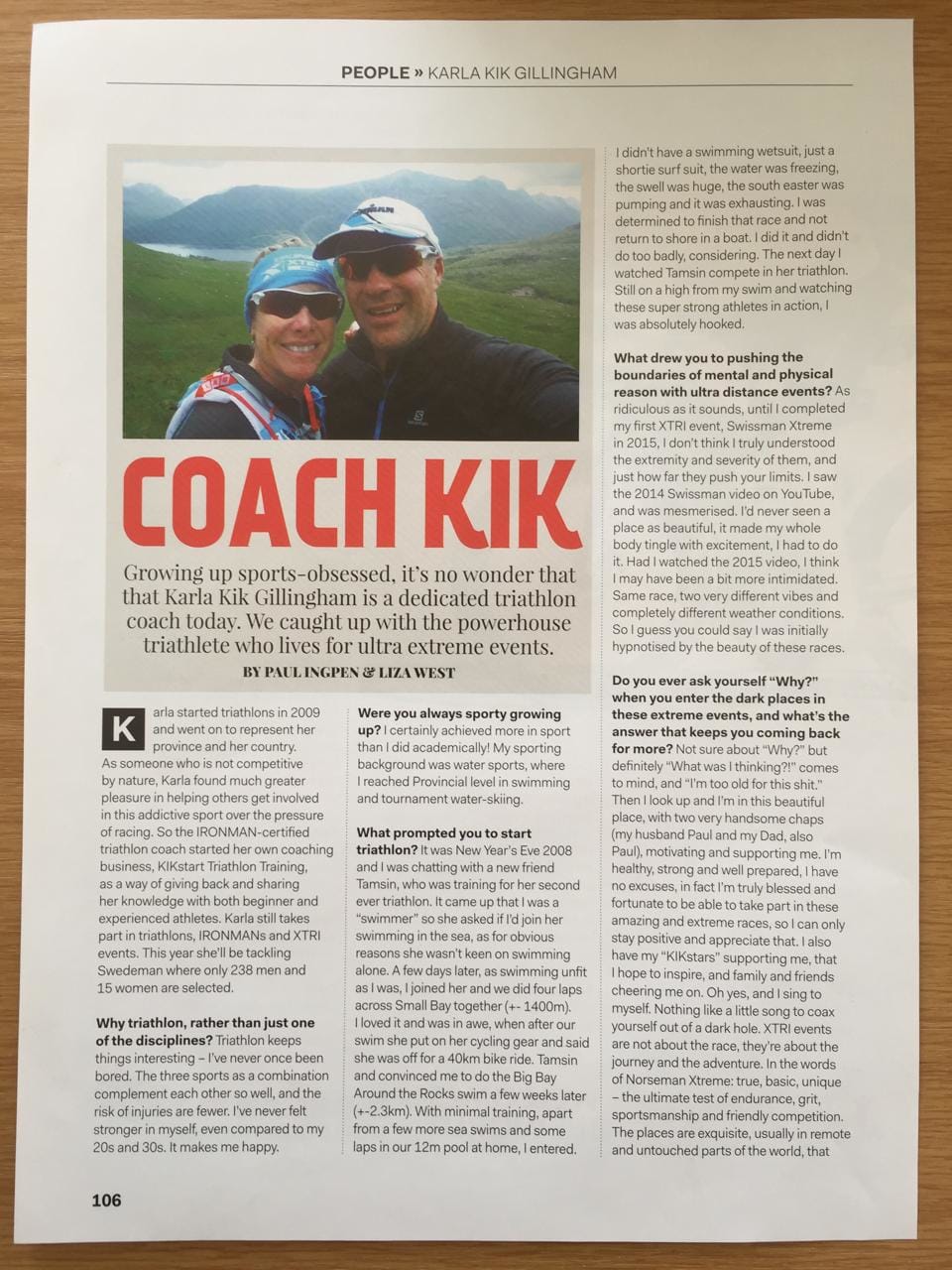 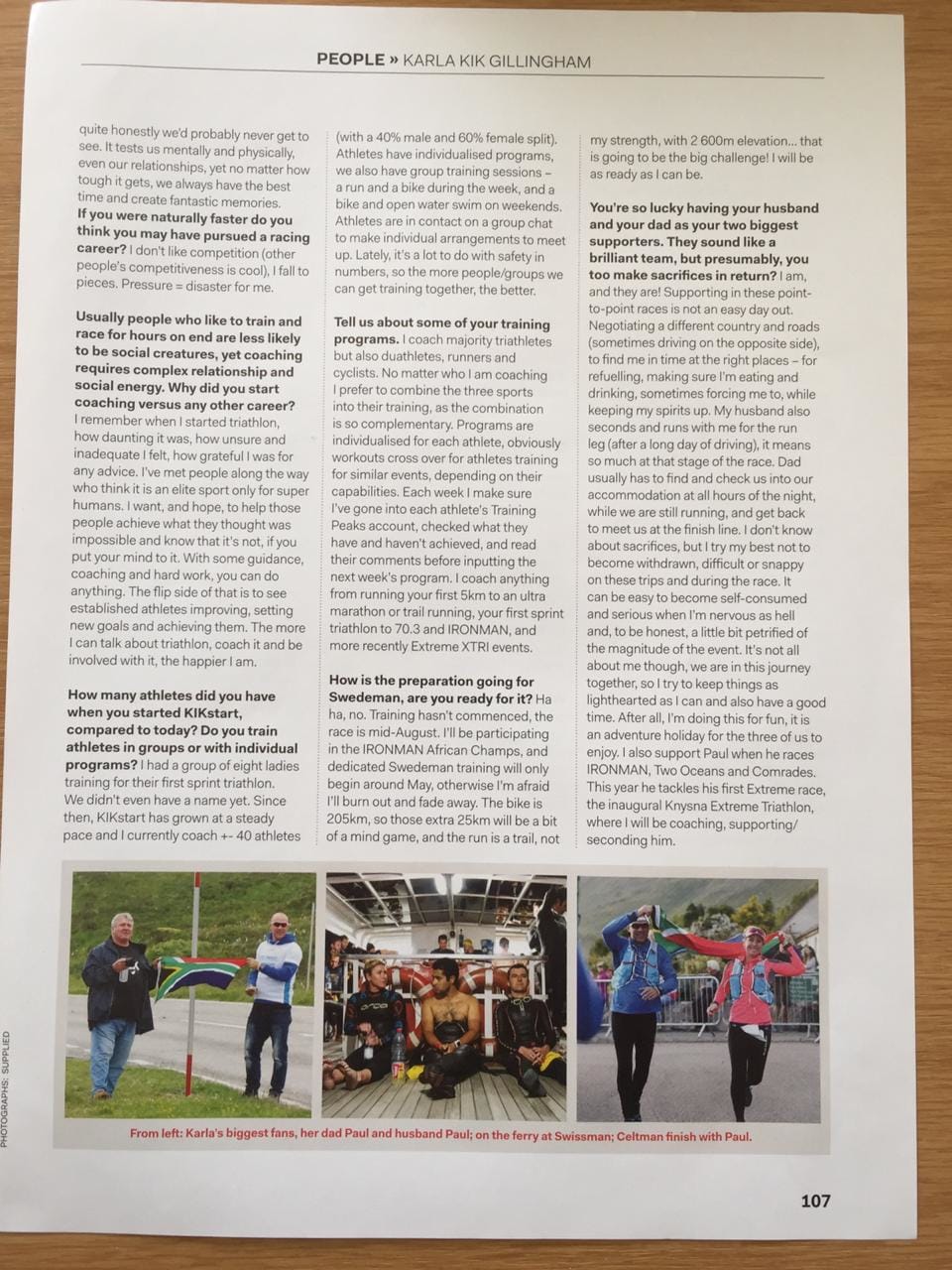 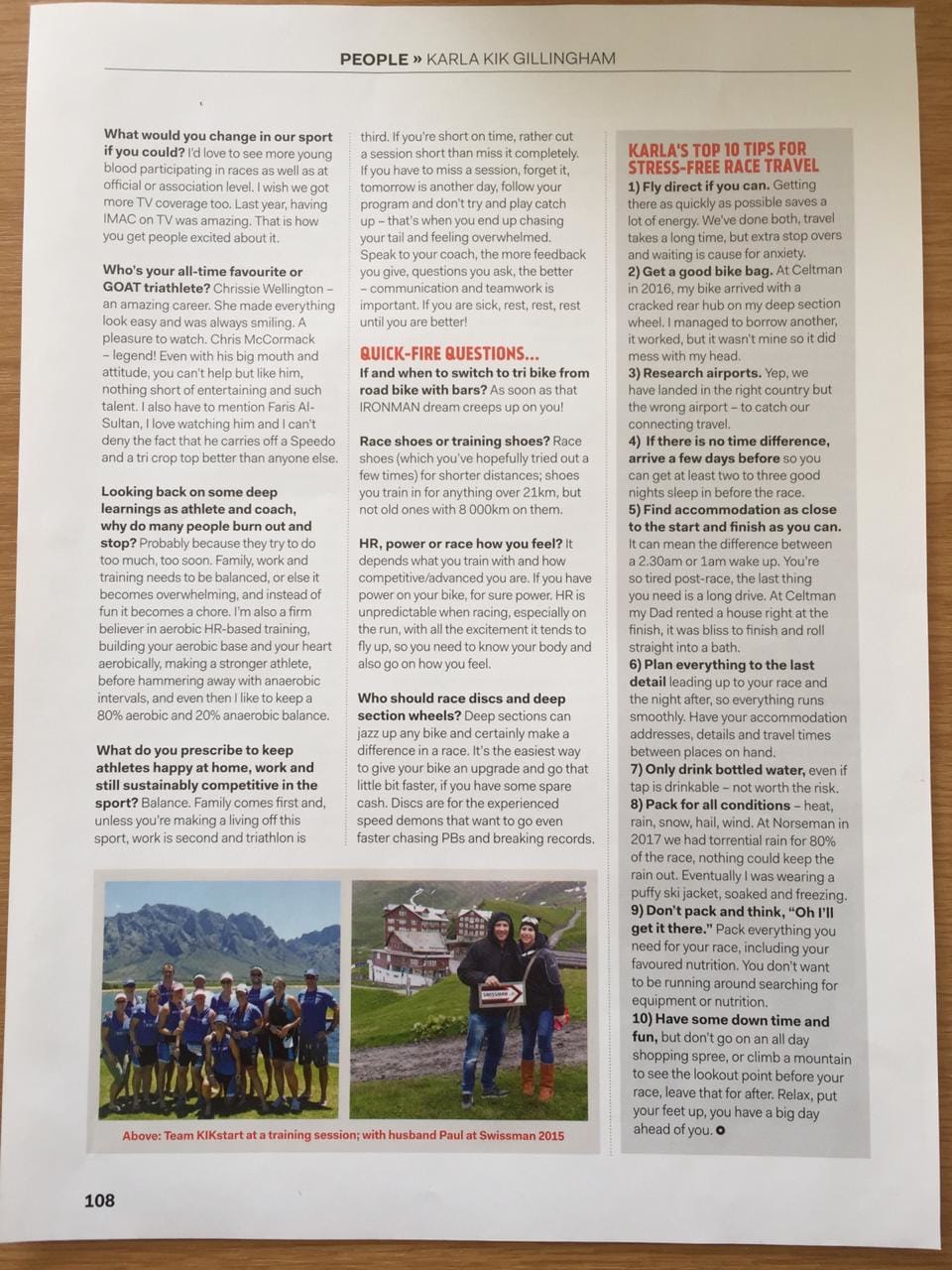 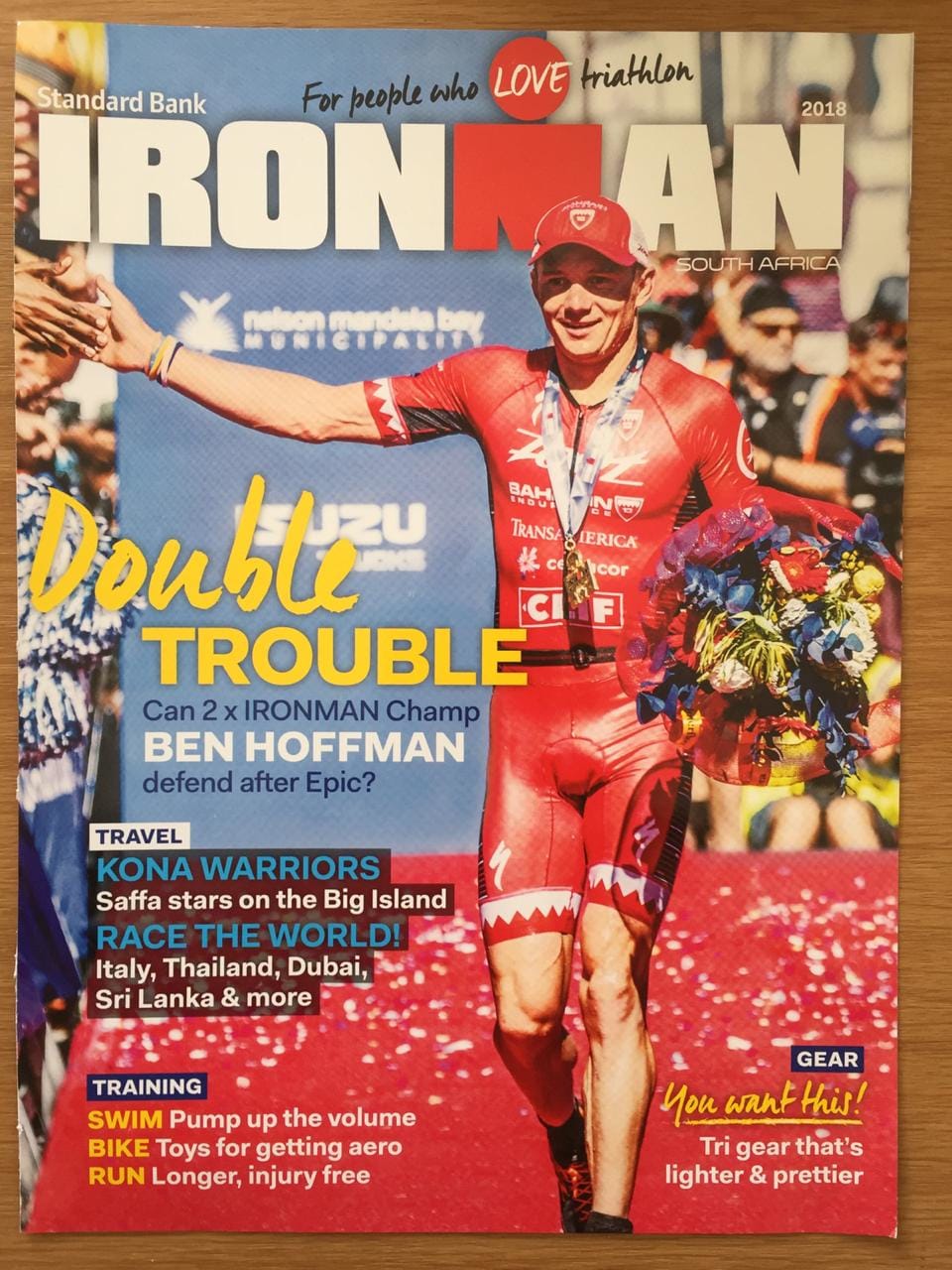 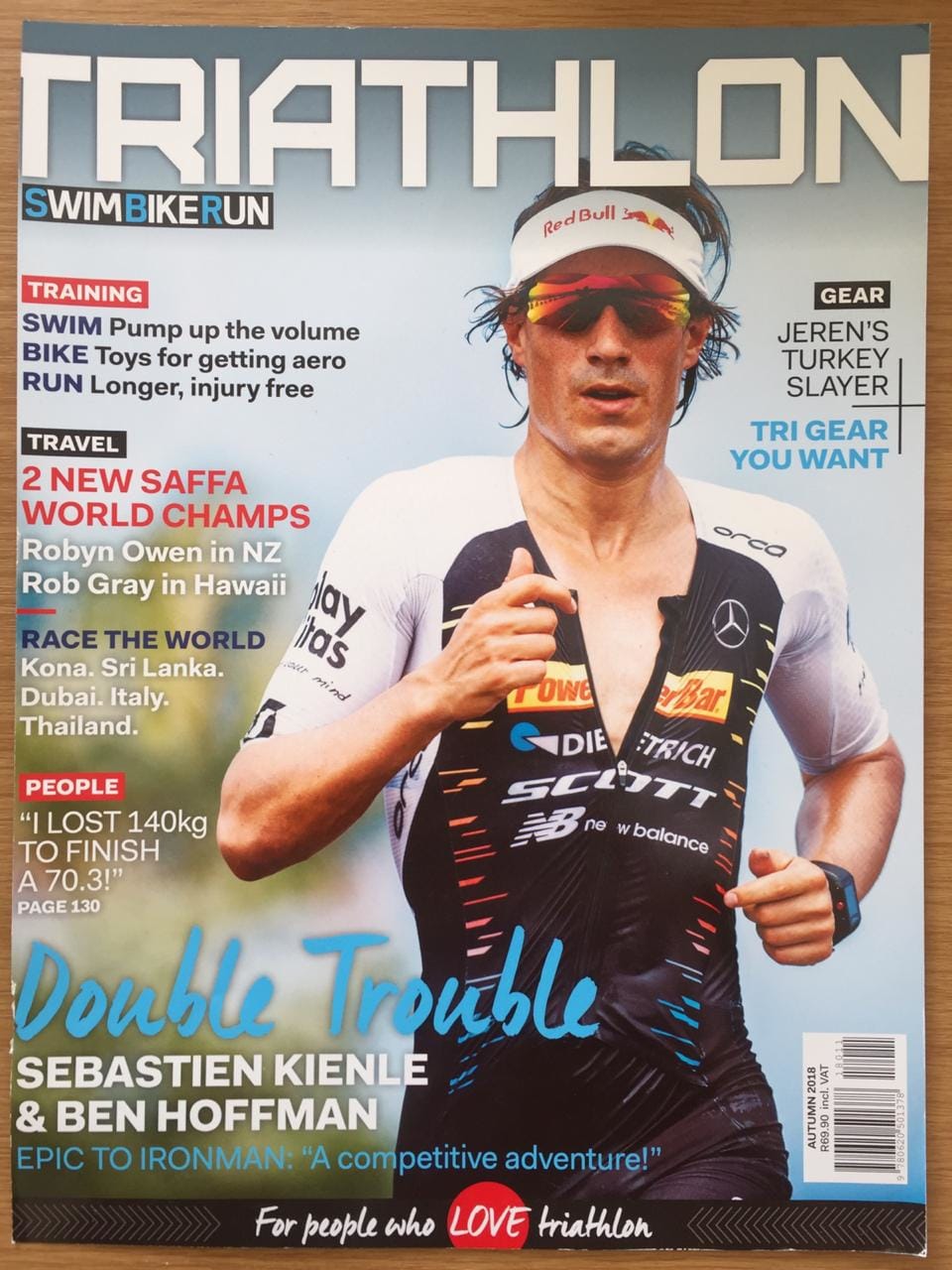 “I always try to keep in mind that I do all that training for a reason, which is to compete to the best of my ability.”